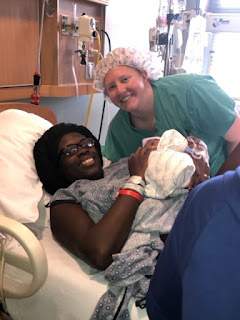 Makeba Evans, the mother of four children, delivered her third child via a cesarean (C-section), a major abdominal surgery that should only be performed when the mother or baby's life is at risk.  A C-section increases the probability of harm for mothers and babies.

Mothers who deliver through C-sections are at an increased risk of developing sepsis infection, blood clot, emergency hysterectomy, a painful and difficult recovery, and death. Their babies are more likely to experience breathing problems and to develop childhood-onset type 1 diabetes, allergies with cold-like symptoms and asthma.

During Makeba third pregnancy, her physician informed her that a C-section was necessary because the baby was too big for her to push during a vaginal delivery.  So, like most pregnant women, she did not  question his advice or seek another medical opinion.

When her fourth pregnancy occurred last year, she returned to the same physician.  Once again, she expressed her desire to have a vaginal birth. In her case it would be a vaginal birth after C-section, known as a VBAC.

"It would be medical negligence to perform a vaginal birth," he lectured her.  "Any doctor doing it is outside of their scope of practice in Mississippi," he continued.  "He told me that my baby and I could die.  "I didn't get a second opinion because I trusted him. He had delivered 2 of my children," she explained.

He insisted on scheduling the c-section several months early to ensure that a bed would be available because C-sections occur so often in Mississippi hospitals, Makeba said.  Her husband didn't want to risk a VBAC because of the "physician's very stern and negative perspective on VBACs".

When Makeba became a client of Sisters in Birth (SIB) in December 2019,  I strongly encouraged her to switch to a physician who performs VBACs.  Unfortunately, there are only about three physicians in the State who perform the procedure, and they are concentrated in the Greater Jackson Area.

Eventually, she agreed to a visit with Dr. Lindsay Jerome, who provided her with evidence- based information regarding a VBAC.  They agreed to attempt the procedure with the understanding that if it became medically necessary, e.g. stalled labor, distressed baby, or increased blood pressure, a C-section would be performed.

On March 10, 2020, her water broke at 8 am. She received continuous labor support from Simeon Seaton, a SIB community health worker, who is also a trained doula. Approximately 4 hours into labor,  she vaginally delivered a healthy 6 lb., 13 oz boy, who she began breastfeeding 30 minutes after birth. Her recovery period was 2 days compared to 2 months for the previous C-section birth.

Mississippi State Department of Health data show there were over 13,000 cesarean births in 2018. Mississippi's cesarean delivery rate is 38.3 percent, the highest in the nation, according to data from the Centers for Disease Control and Prevention.

Many providers and hospitals refuse to offer patients the informed choice of a VBAC. The Listening to Mothers survey concluded that many women with a previous C-section birth would have preferred a VBAC, but physicians and/or hospital administrators would not make it available.  Consequently, approximately nine in ten women have repeat C-sections in the United States.

To some degree, pregnant patients could avoid physicians and hospitals with high C-section rates if the information were made available to them. Although the Mississippi State Department of Health (MSDH) collects this information, it does not make it accessible to the public, referring to it as proprietary information. However, after making many requests, I managed to obtain a 2018 MSDH report of newborn statistics by service area, county, and hospital:

10 hospitals with the highest (above 40) C-section rates

5 hospitals with the lowest rates (below 30)

Studies show that variation in C-section delivery rates may be attributable to obstetric practice preferences, financial incentives, legal concerns rather than the patient's health risk, or the state in which a woman resides.